Quest for a Good Staple Remover

Recently, I’ve been scanning boxes of documents recently on my Fujitsu ScanSnap document scanner. The scanner feeds documents through very quickly, a sheet at a time. It can’t handle staples, though. If one gets through, it will drag the next page after it, causing a crumpled paper jam, and with a risk of scratching the scanner’s optics, so I need to carefully remove them before I do my scanning.

Of course, the quick-and-dirty approach would be to cut the corners off the paper with a pair of scissors, but I don’t want to do that.

I’ve had a hard time finding a staple remover that works for me.

The most common type is the staple remover with two carnivorous jaws.

I have one, but I’ve never had much success with it. You’re supposed to insert the sharp edge of the jaws behind the flat top of the staple. When you close the jaws, the jaws act like a wedge, lifting the staple through the paper. There are a couple of problems with this design. First, it’s easy to rip the paper as you’re trying to insert the jaws under the staple top. The jaws are cheaply made, and the tips aren’t usually sharp enough to slide easily under a staple. Also, the curved wire on the back of the staple is forced to straighten by the paper above it. This is fine if you have a large stack of paper, but it doesn’t work at all if you have one or two sheets – the paper just rips.

An alternate technique is to use the jaws on the underside of the staple first, to unfold the prongs. It’s described here on Wikihow.

When I’m scanning, I find that most of the staples I come across aren’t in some thick stack of letter-sized paper. It’s usually two sheets. It might be paper, but more often it’s two tissue-thin stapled receipts – a shop receipt stapled to a credit card receipt. These staples are hard to remove using a jaws staple remover. It’s not that it can’t be done – just that you could do it faster using your fingernails. 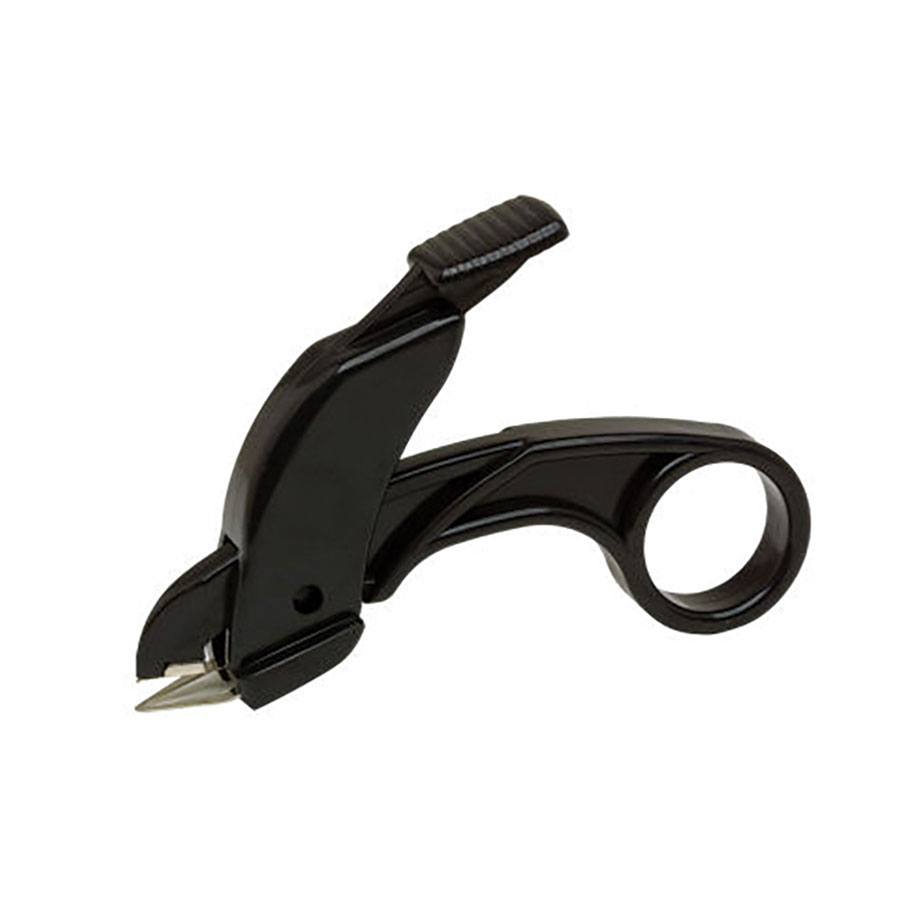 I tried one of these. It’s almost entirely plastic, but has a triangular metal blade at the bottom, and a metal beak that clamps down over it. You slide the blade under the staple, press down on the lever to grab the staple, then pull up the staple.

These little staple removers used to be quite common in the stationery stores, but they now seem to have disappeared. The ever-changing shifts of staple-pulling fashion.

On thin sheets, I found the beak makes a hole in the paper. Cheap, nasty, and not very effective. The staple remover that lacks it all. 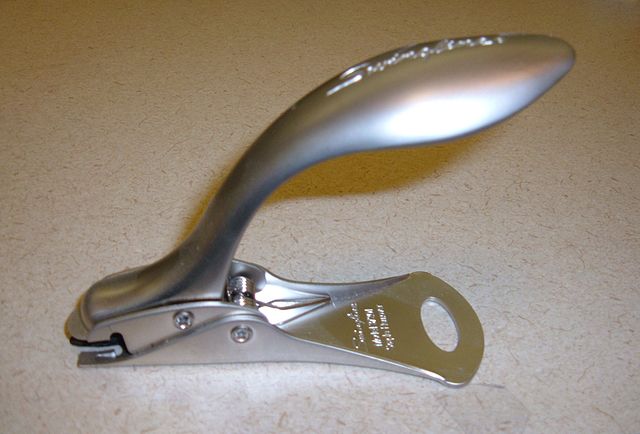 Next I figured that throwing money at the problem would help, so I got a heavy duty stapler. This is another common type. It’s big, heavy and quite expensive. A metal tongue slides under the staple. You then press down on the rounded metal handle to lever out the staple.

Again, this works best if you’re tackling a thick stack of papers, but it doesn’t work well with stapled receipts. It still relies on the papers to straighten the curved ends of the staple.

The stapler in the picture is a Swingline. I have a very similar one from Bostitch (G27W). The metal tongue was never easy to position under a staple. I’ve since sharpened the edge with a file, so it works a little better. I’ve read that the Swingline staple remover has an easier time sliding under the staples, but I’m not going to shell out and try it.

Since I sharpened the Bostitch, it’s been useful for removing staples from stapled booklets – 30 pages or more, but I still need a solution for lightweight papers. 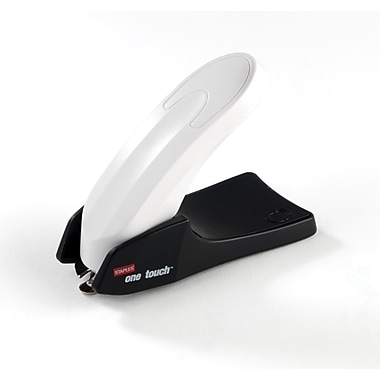 The same but smaller

Staples now has a new staple remover that works in  the same way as the two above.

The Staples One Touch is a small, plastic staple remover. A metal tongue (thin enough to slip easily under staples in larger stacks) lifts the staple against a metal grabber and pulls it out.

It’s not good for receipts, but quite effective on larger stacks, and quite cheap. 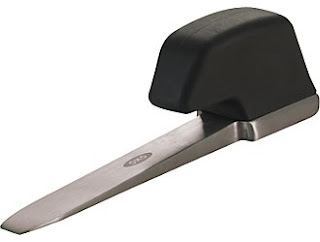 I have an Oxo brand staple remover I bought a few years back.

This is a nicely machined wedge of smooth stainless steel with a rubber handle. It feels solid and well made, works very well as a staple lifter. It can force staples out of thick documents, but, as usual, if you try this on thin documents you’re likely to tear the paper.

The tip is just sharp enough to slide under staples without being dangerous. I filed a notch in the centre of mine, making it easier to fit the tip under the backs of staples and lever them up. It worked pretty well, and gets rave reviews from staple-removal fanatics on Amazon, but unfortunately the company stopped making it.

What the Pros Do

I wondered how professionals remove staples. But who removes staples professionally? Well, archivists, that’s who. They don’t use the standard staple removers, because they’re likely to damage documents. Instead, they use a micro spatula to bend back the curved backs of the staples, then lever the staple out from the front. A micro spatula is a small spatula used by scientists to move small amounts of chemical. The tip has a rounded edge that can be inserted under staples or sheets of paper.

Archivists also like using an oyster knife.  It’s a wooden-handled knife, with a thick blade. I tried one of these, the Russell 4″ Oyster Knife Boston Pattern #22. The finish is nice and it’s strong enough to lever staples from a page, although the blade is dull enough that it can be difficult to slide it under a staple. Again, better for removing staples from thick documents than thin ones.

The archivist solutions got me thinking about using other tools to remove staples. I have a small Victorinox Swiss Army (the “Executive”) knife with a “citrus peeler/screwdriver” attachment (good in an executive Clockwork Orange fight). It looks like a miniature saw with a hooked centre.

The screwdriver end is sharp and smooth enough to slide under staples, and makes it easy to pry up the curved staple ends. I have to be careful when pushing on it, though, as the blade can fold back and, while it’s not super-sharp, it could cut a finger. (I did this once with a blade on the same knife.)

I’ve tried using the nail file attachment on the same pocket knife to see if that would work. It looks like it should, but it’s not as good. The tip is very slightly wider, and it doesn’t slide under the staple nearly as well as the Clockwork Orange executive citrus driver. The knife blade works well, but it’s easy to stab the paper.

Another possibility would be to take a good quality pocket knife blade and dull the blade. Again, this would be sharp and smooth enough to remove staples, but wouldn’t cut fingers.

Butter knives could work well on staples. Some are flexible and strong, but have a safe edge. It might be worth picking up a used one from a shop. I have also considered using the blades in a set of automotive feeler gauges, used to set the gap in spark plugs. They are not expensive, have a wide range of thicknesses, and should be able slide under any staple. I haven’t tried this yet. It occurred to me that it might be possible to cut the staples from one side, then lift out the top section. A flush cutter is a pair of pliers designed to cut wire or plastic flush against its blades. It’s often used to cut pieces from plastic model kits, or to cut pieces of wire after soldering.

I tried cutting some staples with a pair of Nexxtech cutters, and it did snip off the staple quite easily, but the pieces of wire go flying, which poses some dangers. But the method itself worked fine. Once the back (or front) of the staple is cut, the other end can be pulled out fairly easily. It worked best on thin stacks of paper, like receipts or single documents, and less well on thick stacks, where I still needed something to pry out the rest of the staple.

I checked reviews and found that most flush cutters are designed to cut through soft metals, such as copper. Some can be damaged by steel. I don’t know how much of this cutting the Nexxtech cutters would stand up to. (They were fairly cheap.) A brand called Xuron was mentioned in a few places – they have a wide range of cutters with a slightly offset cut, so wire falls to the side, rather than flying into the air. They also make some cutters with a metal catcher, which holds the cut wire until the plier is released. I wasn’t sure about the blade hardness, though. One review mentioned that some Knipex cutters (a German brand) were designed to cut steel wire, and also included a wire catch. I ordered the Knipex 78 71 125.

I’ve tried this while scanning receipts and it works pretty well. It only takes a few seconds to cut off the backs of the staples, and then I can lift the top of the staple off and scan the receipt.

2021-06-10: I’ve since found some other methods that work really well: an artist’s palette knife and stamp tongs.